It was the end of the year 1984 and the world was buzzing with anticipation, a tingling felt across the globe anticipating the start of something amazing, something life changing, something pretty damn cool. The days ticked by and in a little house on the Canadian prairies, preparations had begun among the Porter Family.

Julia would soon be born.

The special day finally came on December 29th, 1984 and a sigh of relief was heard across the world. She had arrived.

The first few years passed without much of note, as the early years often do. Scattered memories and slightly significant moments filled the time; some capitalized (The Swan Dive, The Cat-Scratch Toto) but most not (a move to Langley, other random events). But even without any stand out moments it was clear from the start that Julia was Somebody.

Julia was a beautiful baby, a beautiful toddler, a beautiful child. Julia was and is a beautiful person. Her easy charm settled naturally about her and even at a young age she was the envy of many. Capable of putting minds at ease wherever she went and likeable beyond anything the Porter’s had seen before.

After the family uprooted twice, leaving both Calgary AB and Langley BC, they settled in Victoria BC where Julia finally realized her true calling:

She was an Island Girl through and through.

Julia spent countless hours combing the ocean shores knowing deep within her soul that this was where she belonged. She perfected the art of playing Mermaids and devoured information about the sea creatures she longed to spend her time with.

And then began the adventures!

Julia was always fearless and bold, ready to take on the world at any given moment, and as such has been on many exciting adventures. (Often convincing her sister, Sarah, a girl who has never ever been described as ‘bold’ or any of its synonyms, to go along with the latest scheme.)

Julia explored the wilds of British Columbia and took on the motto “If it’s already done you can’t get in trouble for it”. She built pools and forts, explored tunnels and played Pirates, swam to islands and made her way inland. She has both seen cougars and been a cougar. In short (both in stature and the idiom) she has always been pretty darn cool.

When she was young (younger than even she realizes!) she volunteered at Goldstream Park where her love of nature and the outdoors finally found an outlet. She spent hours and hours traipsing through the woods, instilling in herself a lifelong passion for dirt and all things natural.

(It was here too that she discovered a love of boys, though that’s a different story altogether.)

Fast forwarding through time and many a memorable experience, Julia spent her days loving life and exuding confidence and positivity, traits that carried her through her very own down under adventure of a lifetime, FANZ. It was here that she fell in love both with travel and more deeply with her own island, discovering a newfound appreciation for her home (the kind of appreciation one can only discover after leaving!).

During FANZ, Julia explored different oceans and brilliant forests, braved dark caves and frozen glaciers, rafted wild rivers and fell from the sky – intentionally! Julia threw herself into each experience, bubbling with excitement at every step.

After returning home, Julia discovered another passion, helping people. Julia began working at a local hospital as a Unit Clerk so she could help people without having to touch them and made a positive difference in their lives (something she has excelled at). Julia was and is loved by everyone she works with, earning the respect and admiration of everyone from fellow clerks to doctors.

In her thirty years on this earth Julia’s positive light and generous attitude has inspired many and earned her a permanent spot in every heart she has touched. She is the glue of her family, always being the one to get along with everyone, whether it is her parents or her brother, David, or sister, Sarah, the heart of her friendships, and always the life of the party.

Julia was, is, and always will be special. 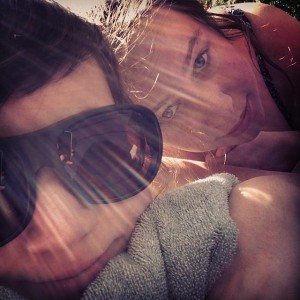 Recent Posts: My Other Blog: triSARAHtops